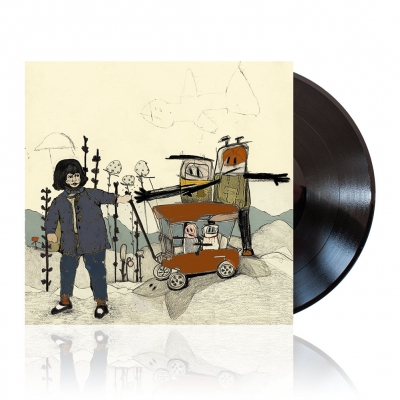 On their first album Before the World Was Big, Cleo Tucker and Harmony Tividad navigated age and introspection—feeling young but being old—through specific lyrical scenes. Their sophomore effort Powerplant takes a more abstract and poetic approach in to the lyrics:

The addition of drummer Miles Witner gives backbone to the dual harmonies of Tucker and Tividad—the deserved draw of Girlpool. With Witner, the sonic representation is more expansive. We see the group explore Lyncheon dream pop, and classic stop-and-go alt rock that everyone seems to be doing. All is standard hipster-indie fare for the cool crowd, but the dreamy atmosphere and lyrical poignancy are what set Powerplant from what you’ll hear over and over and over in 2017.

The video for titular single, “Powerplant” shows the trio half-heartedly performing to coffee-shop art-types in a bowling alley—a setting so “un-hip” it’s fetishized for its irony. The video explores the theme of a singular moment, specifically live performance and a recorded one that is the same the first time and the hundredth. This idea plays out when the video’s director breaks the fourth wall, commanding the band to show more energy.

The moment and the video are comical and offer a meta commentary on the music industry, not unsimilar to Jennifer Egan’s A Visit From the Good Squad.

Pair the album and the book with Lakewood Brewing’s Vienna-Style Lager.

Skip the $5 bowling alley pitcher of lager for one that is as drinkable but more flavorful. Subtle caramel aromas, a coppery pour and a light, malty sweetness paired with hop bitterness will make you rethink your notion of a lager. Enjoy this one with one of those rotisserie pretzels and accompanying Dixie cup of nuclear cheese melt. Cheers.

Kevin Sterne is a writer and journalist based in Chicago, the editor of LeFawn Magazine. Apart from Shuga Records, he’s written about beer and music for Mash Tun Journal, The Tangential and Substream Magazine. His creative fiction has appeared in Drunk Monkeys, Potluck Mag, Defenestration, Praxis Magazine, Down in the Dirt Magazine, and Word Eater, among many others.