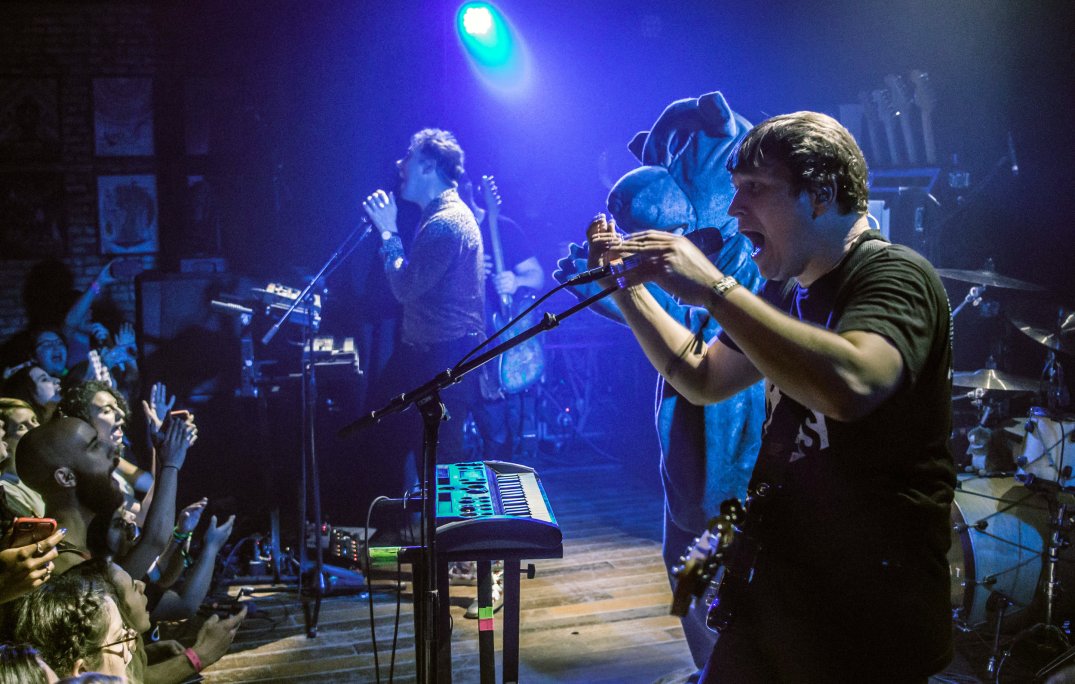 This past Thursday night, The Wombats closed out the first day of Lollapalooza 2018 with a sold out aftershow at Lincoln Hall

As the clock struck midnight, hoards of music fans had piled into Lincoln Hall to celebrate the end of the first day of Lollapalooza with The Wombats. Although they had just performed out in Tinley Park with The Pixies last month and at Lollapalooza earlier that day, the last time The Wombats had performed as a headliner in Chicago was more that two years ago, when they played The Metro in support of their album Glitterbug. Despite the late start time of the aftershow, old and new fans of the band buzzed with anticipation during the moments leading up The Wombats’ entrance to the small stage, everyone anxious to hear some of their old favorites as well as the freshest material from this year’s Beautiful People Will Ruin Your Life.

The set began with the new; The group opened with “Cheetah Tongue,” the first track off their fourth studio album, but from there on, the setlist took twists and turns through The Wombats’ extensive catalog of material. Following “Give Me a Try” from Glitterbug, the band threw it back to 2011 and 2007 with “1996” and “Kill The Director.” While The Wombats did a great job at compiling a setlist of songs that highlighted each of their album eras, one of the best experiences of the show was looking around and seeing fans scream the lyrics along with lead singer Matthew Murphy and dance throughout the night with unwavering gusto, during every single song. Murphy and bandmates Dan Haggis and Tord Øverland have continuously mastered creating music that blends clever and sharp narratives with danceable melodies and grooving bass lines, allowing for fans to connect with the lyrics while dancing it out.

Live, the trio translates their records to life with a keen stage presence and unmatched chemistry, which stems from their years and years of playing music together. Despite their grueling tour and travel schedule as of late and the fact that they had played Lollapalooza earlier that afternoon, The Wombats never skimped on the energy during their show at Lincoln Hall; Øverland still delivered his signature kicks and jumps as he played bass and Murphy often paraded around the stage with his guitar. The entire room was already beaming from ear to ear as the set came to a close, but the band still had one more surprise up their sleeves. During iconic tune “Let’s Dance To Joy Division,” three people dressed up head-to-toe in wombat suits rushed the crowd and stage to close out the night, and everyone (even the wombats) clapped along to the athemic bridge of the song.

Following the humorous guest appearance, The Wombats (the band) returned for an encore, bringing along the costumed wombats again. The three song encore consisted of one of their recent singles, “Turn,” “Tokyo-Vampires & Wolves” from their earlier days, and “Greek Tragedy” from their third album, once again equally representing all of their eras. No matter what year your favorite song from The Wombats comes from though, there’s no denying their music and their live show has a timeless quality to it; it will always be a challenge to find anyone having a bad time at a Wombats show.

Check out photos from the show below, and see where you can catch The Wombats next here.