Bastille took over The Fillmore in Philadelphia last Thursday night to play the last headline show of their sophomore album’s saga.

Kicking things off on the last night of the Wild, Wild World Tour, the Los Angeles duo Frenship took over the Fillmore stage for 45 minutes. Getting by with a little help from their friends in their live band, James Sunderland and Brett Hite performed popular songs like “Carpet” and “Run Wild” from their Truce EP. One of the set’s highlights included their performance of the viral track “Capsize,” which has racked up almost 400 million Spotify streams and features vocalist and songwriter Emily Warren on the studio version. Live, Frenship’s keyboardist and vocalist Celeste steps in to sing Warren’s parts, but the band also had the audience singing along to the catchy chorus as well. The real highlight of the set happened when Bastille crashed the stage during Frenship’s last song “1000 Nights,” which only got the audience more excited for the show that would follow.

Thirty minutes later, the house lights dimmed, stage lights flickered, and the four members of Bastille made their way onto stage, accompanied by live band member Charlie Barnes. As the opening chords of the brassy and bassy “Send Them Off!” rang out into the Philadelphia venue, cheers erupted from the crowd and lead singer Dan Smith began to sing the lyrics that allude to Shakespeare’s Othello. The set took a brief retrospective turn when the band performed “Laura Palmer” off their debut album, which seems pointedly apt again with the reboot of David Lynch’s cult classic TV show Twin Peaks. Before the bright lights on the stage dimmed to place the spotlight on Smith and his keyboard where he would sing the ironically sombre song “Overjoyed” from the debut album, Smith took a break to call attention to some of the signs held up by fans on the barricade. Bringing one on stage that read “I Totaled My Car Driving Up From DC To Be Here,” Smith asked the fan what had happened, holding out the microphone for her to share her story. He then selected a sign that read “Don’t Blame Me, I Worked 4 Hillary,” which alluded to the band’s song “Blame” and their politically driven song “The Currents,” which cleverly digs at Donald Trump. After the quick detour of “sign related stories,” as Smith called them, the show continued with Smith slightly struggling during “Overjoyed” due to vocal stress and sound issues. Although he remained visibly conscious of his vocals and sound levels during the performance, he pushed through and still delivered the sweeping range required for the song.

The remainder of the set weaved in and out of older tunes and newer ones from Wild World, which just hit its first birthday on September 9th. The fourth song of the night, “Warmth,” acts as a title track almost, with its lyrics containing “Hold me in this wild, wild world” during the chorus. Another true Bastille show staple, Smith left the stage to go sing and dance with the Fillmore audience during their single “Flaws,” another throwback to their first album. While the set contained a mix of Wild World and Bad Blood cuts, the band also sprinkled in a few other surprises. They induced 1990’s nostalgia when they performed their popular mashup cover titled “Of The Night,” which combines “Rhythm of the Night” and “Rhythm is a Dancer” and got the crowd jumping up and down with Smith yet again. “Of The Night” was first released as part of the band’s illegal mixtape called Other People’s Heartache, which contained uncleared samples and cover songs…so the only place to hear these songs are now live or in the deep dark corners of the internet. 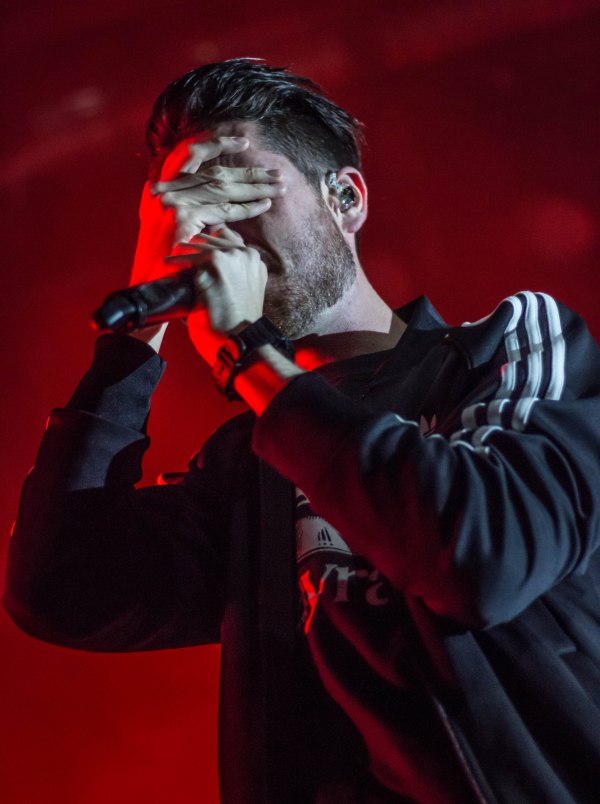 Bastille also brought back “The Draw” from their extended album All This Bad Blood, which almost acts as album 1.5, as it contains a full album of never before released songs that came out between the two official full lengths. The biggest nostalgic surprise, however, came when Smith and co performed a beautifully rearranged version of their 2014 single “Bad_News,” which was released both independently as a music video and as a remix on their mixtape entitled VS. (Other People’s Heartache Pt. III). This mixtape containing collaborations with the likes of Haim, Rationale, Lizzo and more is actually legal and can be streamed or purchased on all major platforms. Speaking of collaboration, the set ended with the group’s massive hit “Pompeii,” and this time the tables turned when Frenship crashed the stage to lend some help with the “eh-ohs” and drumming. The band left the stage to a venue ringing with applause and echoing eh-ohs.

The 19-track setlist did not include Bastille’s latest single “Glory” or another “Wild, Wild World Tour” setlist staple “Lethargy,” probably due to Smith’s vocal strain, but they still managed to fill up 90 minutes and deliver a well-rounded show that contained layers from each saga of Bastille’s career to date. Smith told the crowd they’ll be returning to The States soon with new music, which will include another one of their mixtapes and a new LP within a year’s time. As Bastille’s musical catalog continues to grow, their sound will only grow more diverse and multifaceted, and we can’t wait to hear what they release next.

Check out the full photo gallery of the show below

Can’t enough Bastille? Head to the shop to pick up their full version of Wild World or snag it from the webstore here.